Survey will open in a new window or redirect momentarily, please keep this tab open! If the survey does not open, please enable popups and refresh the page.

Economists and other social scientists are increasingly collecting forecasts of research results. Forecasts are typically collected before research results are known. These forecasts can be used to contextualize research findings, mitigate publication bias, and improve the design of experiments. See this Science article for a short summary.

In the Survey Design section of this page, we outline some key features to include when designing research forecasting surveys, though not all features will be relevant for each study. We also provide an overview of how to use the platform to elicit forecasts. A template Qualtrics survey can be found under the Qualtrics Template header.

Forecasts can be collected for both experimental and nonexperimental studies, and for treatments effects and other study parameters. For example:

When designing a forecasting survey, it is important to consider:

Respondents should be aware of how the outcome they are predicting is being measured (e.g. through an online survey) and how the outcome is constructed (e.g. we are interested in a composite measure of x,y, and z).

When should forecasts be collected?

Forecasts can be collected at any phase in the research process before experimental results are known. This includes:

(1) After an initial study design has been developed but before data collection has begun.

(2) After baseline or midline has been conducted (for experimental studies).

(3) After endline has been completed, but before results have been examined.

In general it is better to collect forecasts  before experimental results are known (unless forecast outcomes were pre-specified) to avoid collecting predictions on “unusual” results (e.g. null effects or very large effects).

Often we are interested in the average forecast, which can be influenced by extreme values.

A common strategy to reduce the likelihood of outliers is to bound the response scale in Qualtrics. Many project teams choose to bound response scales at +-1 standard deviations, though this will depend on the outcome and context.

A complementary strategy is to consider transformations like winsorization that can limit the influence of outliers. Another alternative is use measures of forecast centrality like the median forecast which are less susceptible to outliers than the mean prediction.

Here are some tips to improve the quality of data from your Qualtrics survey.

Modifying variable names: You may want to give each variable a short and intuitive name. For example, a question eliciting forecasts of consumption could be named "ForecastConsumption" or "ForCon" for short. Avoid using symbols such as periods or underscores in names, as these can introduce errors into some data structures. To modify a variable name, simply click the automatically generated name:

Modifying variable labels: Each variable is given an automatic label containing the beginning of the question text. You may want to change the question label to provide a brief description of the question. The example above could be labelled "forecasts of consumption".

More information can be found on the Qualtrics website under Editing Question Labels.

Modifying variable values: Qualtrics sometimes assigns values to responses on multiple choice questions that you might not expect. You may want to check what numbers Qualtrics has assigned and modify the number associated with the responses accordingly. For example, in the figure below, you may want to label the values 1 and 2, as opposed to 4 and 5. To view and/or modify the value labels, first click the gear icon, then select "Recode Values".

More information can be found on the Qualtrics website.

Numeric response bounds: You may want to bound the range of forecasts respondents can provide for text response questions. Bounding can reduce the risk of entry errors. In the example below, we bound responses at +-2 (standard deviations), since the literature suggests that effects outside this range would be very unlikely.

Note that too much rounding can introduce forecast error (for example, if I want to predict an effect of .5 percentage points, but am limited to whole numbers). The number of decimal places you allow will depend on the scale of the outcome being predicted.

Image hosting: We are not able to host images on our Qualtrics account. Therefore, images referenced in your Qualtrics file need to be externally hosted. After you upload your survey, be sure to go through it using the "preview" function to check for formatting issues before the survey is distributed.

We have designed a Qualtrics template to help you design your forecasting survey.

During our soft launch, we will be prioritizing certain projects. For more details, click here.

There are 5 steps to eliciting responses using the platform: Details on each of these steps are provided in the sections below.
To register a survey, first click All Studies, then click Begin under Create New Submission.

Step 1 of registration requires that you provide the following information for your study: You will also be required to upload your survey (.qsf) file.

Some surveyors may wish to provide financial incentives to respondents. These could be flat-rate incentives for participation, or could vary based on forecast accuracy. While we do not offer a mechanism to distribute payments, surveyors can have respondents opt in to provide an email address that can be used to coordinate payments. If you choose to offer incentives, we ask that you provide some basic information on the type of incentives. We provide examples of these questions below, which you will be asked when registering your survey. 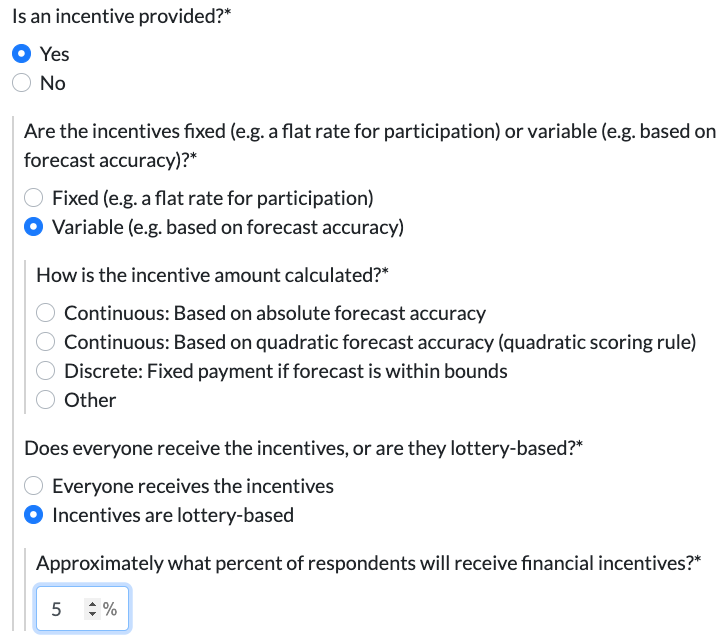 When respondents take the survey, they will be able to opt in to provide you with additional information, as in the example below (where the surveyor has set different incentives from the example above).

This option allows researchers to prevent themselves from viewing their forecasts before a designated time. This option can be selected if, for example, you would like to guarantee that forecasts will not be viewed until after a study is completed. This can serve as a way for researchers to credibly signal that they did not modify their analysis after seeing the forecasts, mitigating the worry that they could have engaged in specification searching to find "surprising" results.
In addition to coordinating forecast elicitation efforts across researchers, we plan to use data collected on the platform to improve our understanding of forecast accuracy. This will help academics and policymakers improve their research and decision-making.

In order to reduce burden to platform users, we ask that you answer a few short questions about a key forecasting question, such as the main outcome of your study. After the study is completed, we will ask that you report the results for this outcome to us. If you select multiple key questions, we will ask you to report the results for each of them.

To select key questions, navigate through your survey using the built-in preview function of the platform: 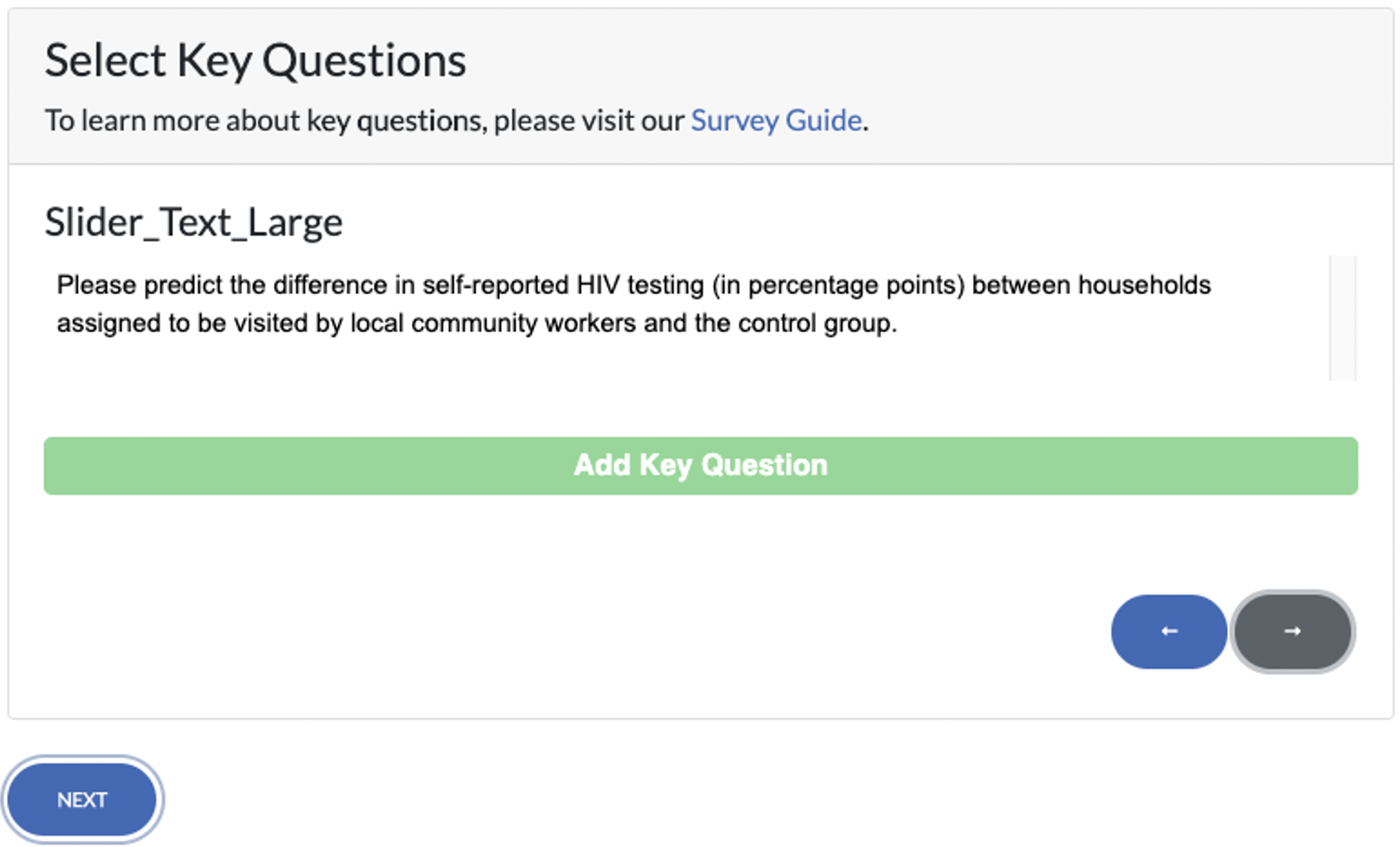 When you select a key question, you will be asked to provide the following information: What is the subject of the question? Does this question use a text entry box or slider bar? What units are the forecasts elicited in? Is the standard deviation of the outcome known? (please use the same units as the outcome) When you have selected all of your key prediction questions, click Next to continue to the next page.
Some researchers may be interested in collecting measures of forecaster confidence, though such measures are not required for a forecasting survey.

Measures of forecaster confidence can serve several purposes: Examples of two popular types of questions measuring forecaster confidence are provided below:
To distribute surveys by invitation, you need to upload a distribution list. You can do this either by directly uploading a list of (first name, last name, email), or through a .csv template we provide. 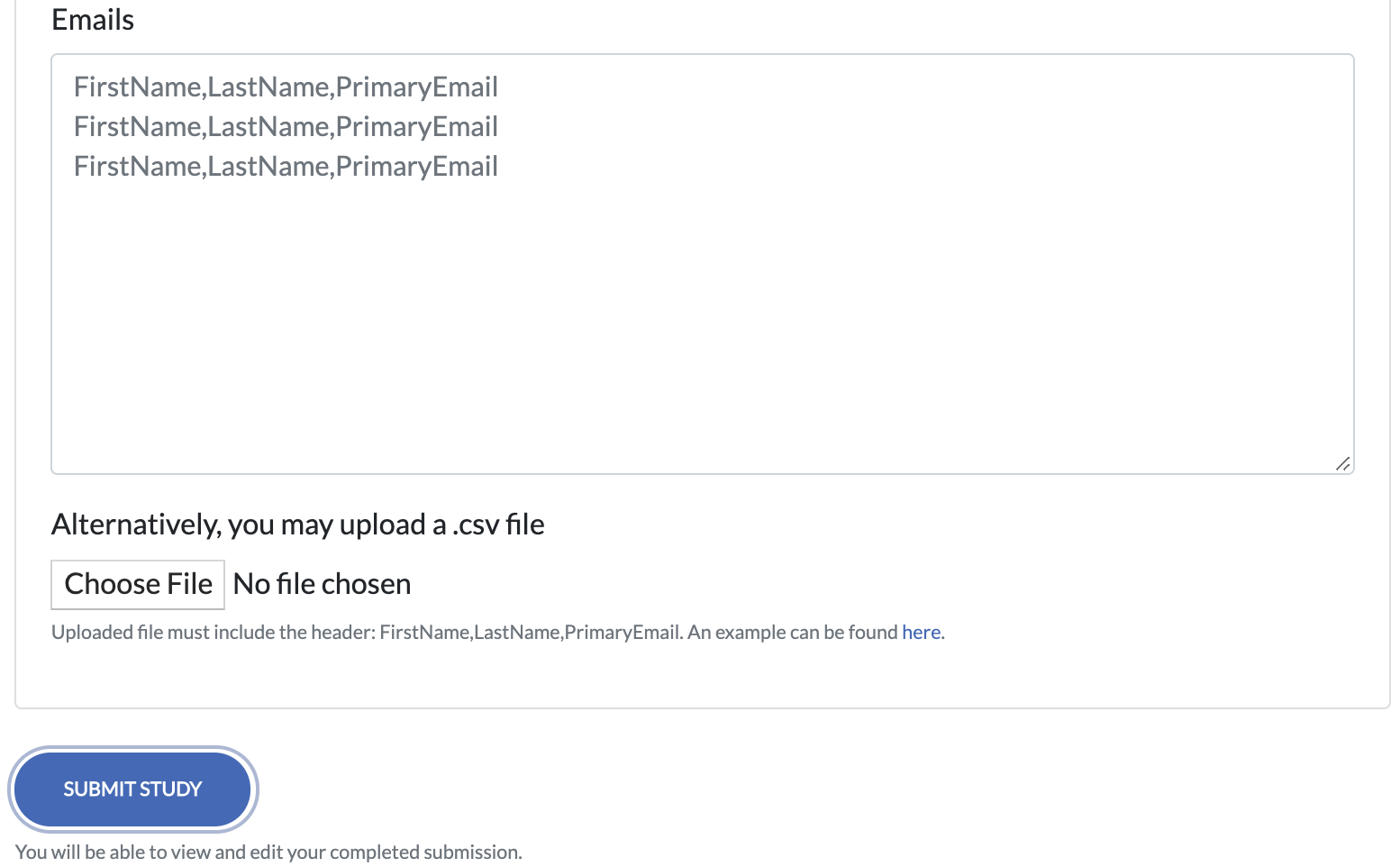 You can upload a maximum of 100 recipients, and can also modify this list before the surveys are distributed. Note that if a contact has recently completed a forecasting survey or has opted out of receiving forecasting surveys, they will not be contacted.

Under no circumstances will we provide the survey elicitor with a respondent's name or email address. However, it is possible that a respondent could be re-identified based on other information they provide. Platform administrators will also have access to the information respondents provided during registration.
After your survey is submitted, platform staff will review it for completeness. After approval, you will need to select "Publish Survey" before you are able to distribute your survey.
To view approved surveys, click All Studies and select Manage:

(1) Distributing surveys through an anonymous link

To distribute your survey through an anonymous link, simply select Get Anonymous Link. The single anonymous survey link can be distributed to your target audience.

(2) Distributing surveys through the platform

Once you are at the Survey Dashboard, you can send the survey to your distribution list by selecting Distribute Survey.

Here, you will be provided with a template email that will be sent to your survey respondents. You can modify this template, but you must keep the text “[[ SHARE LINK ]]”, which will be automatically filled with the survey link when the survey is distributed. 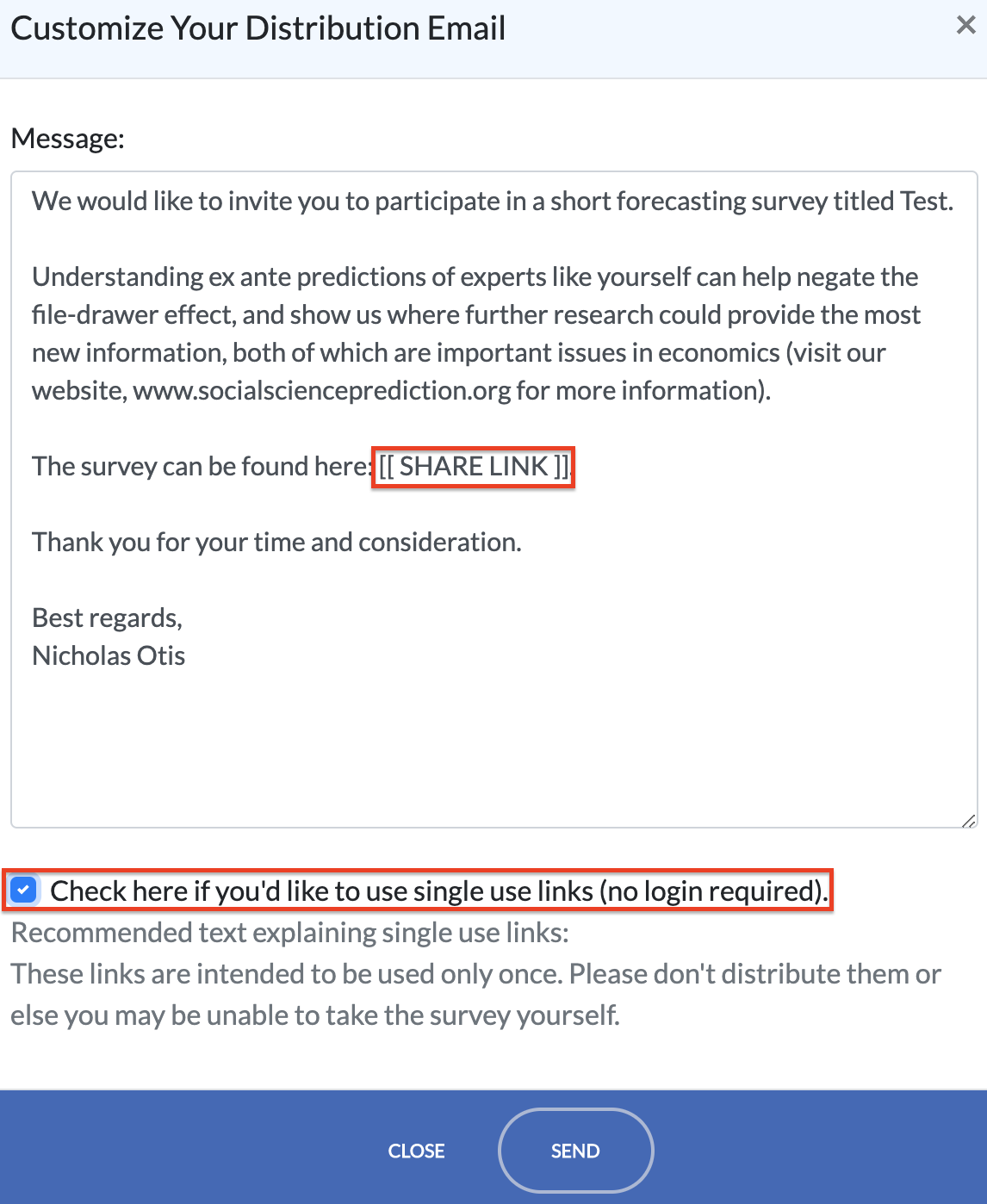 There are two options to distribute your survey through the platform:

(1) Single use links: If you select to use single use links, each respondent on your distribution list will receive a unique survey link that can be completed without requiring the respondent to create an account.

(2) If you do not select single use links, responses will depend on the visibility option you have selected for your survey:

Whenever a survey is taken by a platform user, we collect the following information:

What describes you best? Please select "yes" if you are currently one of the following: {Graduate student (MA or PhD), Faculty, Post-docNon-academic researcher}