Survey will open in a new window or redirect momentarily, please keep this tab open! If the survey does not open, please enable popups and refresh the page.

Dismiss
A link to the study pre-analysis plan allows forecasters to read further if they want additional information.
Study: The Impact of a Multidimensional Program on Nutrition and Poverty in Burkina Faso
Authors: Adrien Boguen and Andrew Dillon


It is important to inform respondents about the intervention context.
Study introduction: A large number of people living in Burkina Faso live in poverty. This problem is compounded by the Sahel environment, which leaves households vulnerable to food insecurity. This impact evaluation examines the effects of a multi-faceted anti-poverty program in rural Burkina Faso.

Respondents should know who the intervention is targeting.
Target population: The program targets ultra-poor and poor households with a breastfeeding, pregnant women and/or a child under the age of five who are experiencing malnutrition. Ultra-poor and poor households were identified before randomization using quantitative and qualitative targeting methods. On average, 21 households per village were selected to be eligible for the program.

Respondents should know the sample size in the experiment, and the level of randomization.
Randomization: This study is a cluster randomized controlled trial. Randomization takes place at the village level: 168 villages were randomized into one of three treatment conditions or a control condition. Note that treatments varied slightly based on region. The main components of these three treatments are described below:

This study involves cash transfers. To understand the magnitude of the transfers, we present them in FCFA, PPP adjusted USD, and as a % of monthly transfers.

This table highlights the key components of the interventions in a condensed format. Respondents are able to revisit this when they provide their predictions. 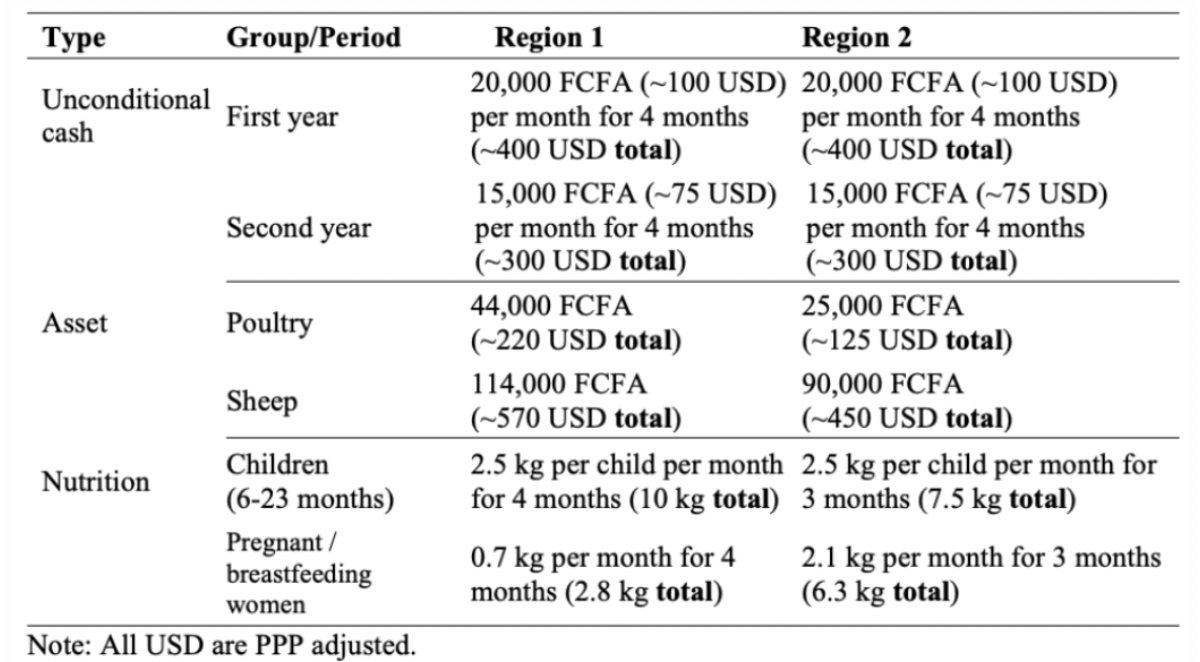 Respondents should know when outcomes are measured relative to treatment delivery.
Timing: The second wave of the intervention is estimated to be fully delivered by November, 2020. Endline is estimated to take place in April-May, 2020.

When we collected forecasts, the interventions had not been fully delivered. Additionally, some respondents who were not supposed to received interventions had been treated. We summarize this information in the table below. More generally, participants should be made aware of any uncertainty in treatment implementation.
Treatment delivery: The table below depicts the proportion of households in each group that received an intervention midline (after the first year of treatment should have been delivered).

Respondents should know the sample size in the experiment, and the level of randomization.
Randomization: This study is a cluster randomized controlled trial. Randomization takes place at the village level: 168 villages were randomized into one of three treatment conditions or a control condition. Note that treatments varied slightly based on region. The main components of these three treatments are described below:

Respondents should be provided with a comprehensive description of the predicted outcome.

Given issues with implementation fidelity, we emphasize that we are collecting predictions of expenditure differences based on assignment.
One outcome we are interested is monthly household food consumption expenditure. This includes purchased food, home produced food, food received from other household members, friends and in the form of in-kind payments.

Please predict the difference in monthly health expenditure between households assigned to each of the three treatment groups and the control group.

When providing details of an intervention, respondents may want to know how successful implementation was. For example, did all teacher attend all six training sessions? If this information is not yet known, it scan be good to state it explicitly, or to provide bounds (see the example for Bouguen and Dillon).

We bound numeric responses at +-1 SD to avoid confusion among survey respondents.

We chose not to randomize elicitation order for this question, since there is an intuitive ordering.

Here we bounded our slider scale at +-2 SD, but elicited predictions in raw units. To avoid acquiescence, the slider must be moved to continue to the next question (the default is not 0). 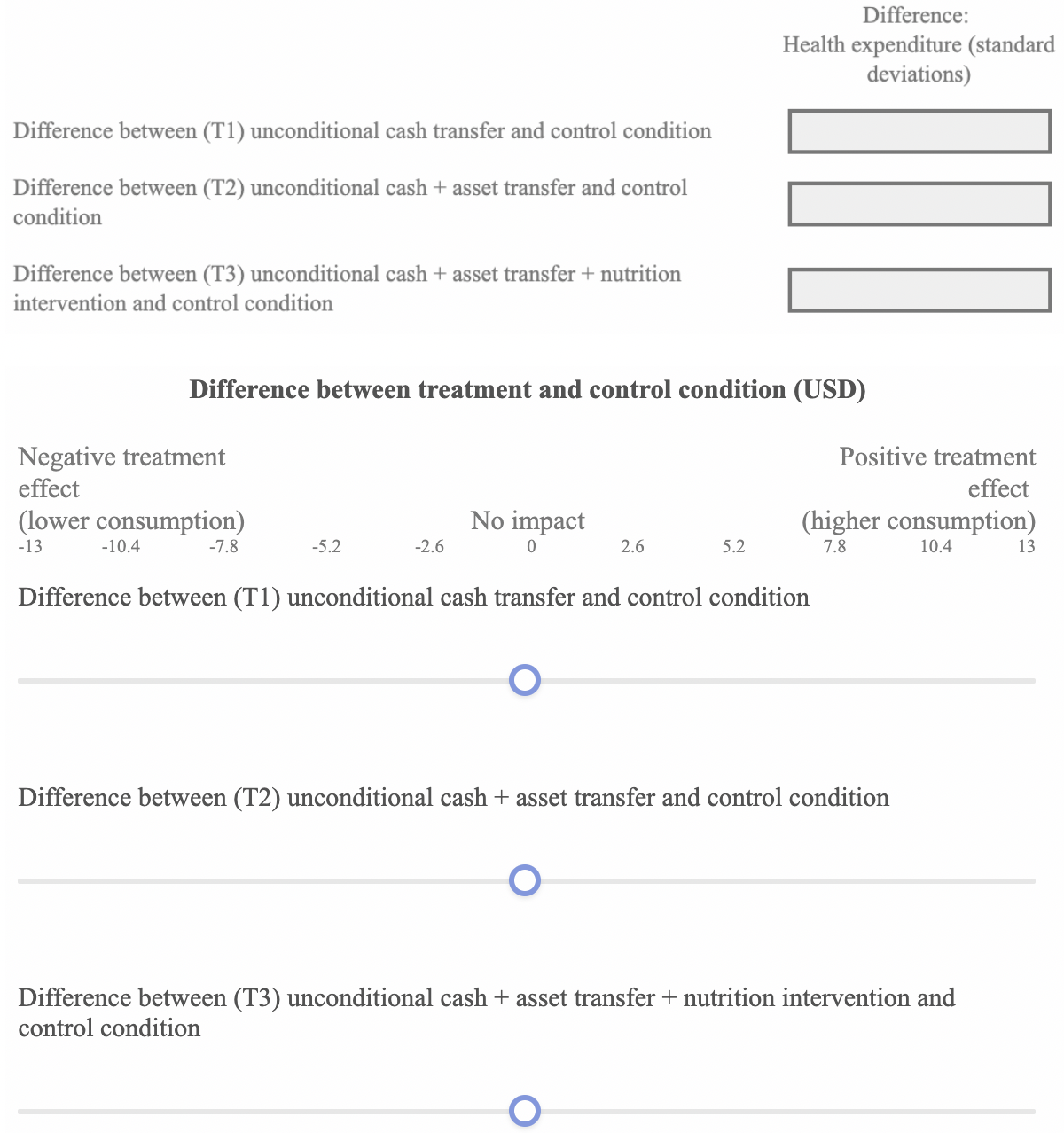